A rare union of cask ales, cocktails and craft beers at Good Intentions 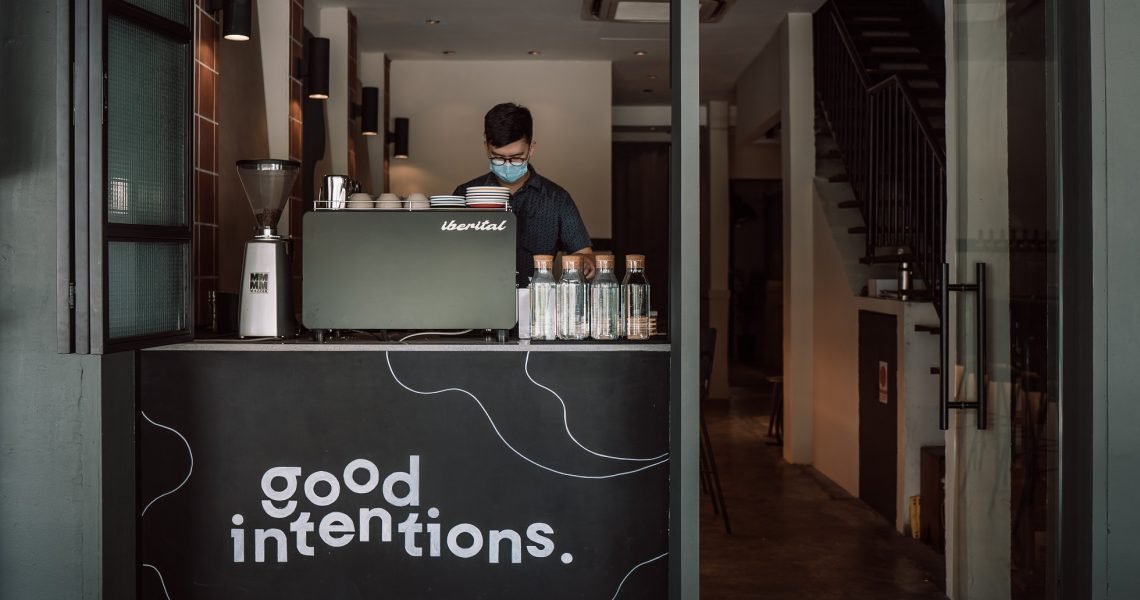 It’s funny how the more options we’re given, the harder it is to make a decision on where to go. And along Singapore’s vibrant East Coast Road (including neighbouring Joo Chiat), it has never been more difficult to find a place to plonk yourself, given the deluge of new openings the area has seen in recent times.

That also means it’s now harder for concepts to stand out. So colour us interested when charmingly-named Good Intentions, from the same folks behind Good Luck on Haji Lane, swung open its doors.

What has gotten us truly intrigued is its unique amalgamation of an all-day café and bar, with enough novelty as well to give frequenters of the area lots to keen their attention, plus a dose of familiarity keeps things grounded.

Within its two-story shophouse space, the first thing that caught our attention were the cask ale offerings (S$16/pint). Rarely offered at bars in Singapore given its nuances, they’ve endeavoured to do so as a way to showcase a new and interesting way to enjoy beers.

Offering cask ales requires commitment from the breweries Good Intention sources from as well, given how quickly the quality of the beers can degrade if not handled properly in transit and at the bar. Luckily, veteran local breweries the likes of Brewlander and The General Brewing Co. have agreed to team up and provide the laborious, but highly worthwhile service.

One of the main differences between cask ales and regular draft beer is with the way the brew gets pumped into the glass. While kegged beer is carbonated using CO2 and then tapped out of the keg using CO2 when required, cask ale is naturally carbonated and pumped out of the cask using a hydraulic beer engine.

This means that cask ales are liable to spoilage much faster than regular kegged beer given their exposure to air. But the positive trade off is that cask ales get a more rounded mouthfeel due to the lesser overall CO2 in the beer, a sexy natural cascade similar to nitrogenated beers, and flavour profiles truer to the brewer’s intentions given the freshness and warmer temperatures it is usually served at.

That’s not to say kegged beer isn’t any good (they’re just different), and at Good Intentions, they’ve got a solid 13 taps (S$14-S$18) to choose from. In line with their support local ethos, most, if not all of their selections are from Singapore craft breweries the likes of Alive Brewing Co., Niang Brewing Co., Off Day Beer Company, and more.

While it may look like beer is a focus here, their cocktails are proper and got our interest piqued as well. The Not a Lychee Martini (S$20) cleverly uses Daiyame Shochu as a way to inject lychee notes into the drink without using any actual lychees or syrup, and is stirred down nicely with gin, vermouth, elderflower liqueur, and bitters.

Meanwhile, the Burnt Butter Espresso Martini (S$18) is an aromatic and comforting choice, and makes for the perfect midday drink. Here, browned butter is fat-washed with bourbon, then mixed with coffee liqueur, vanilla, and freshly pulled espresso. The result is a creamier, more decadent take on the classic Espresso Martini we all know and love.

And yes, they’ve got an espresso machine on-site as well. As an all-day concept, serving barista-made espresso coffees is a must, and their caffeinated beverages menu is a highly succinct (choose between black, white, iced or cold brew), but quality offering.

It wouldn’t be complete without food to go with the amazing drinks programme, and Good Intention’s brand of comfort staples done right is simply crackin’. For bites to go with your booze, look no further than the sinfully gorgeous Duck Fat Tater Tots (S$8). Or get the Shrimp Paste Karaage (S$12) instead for a fan-favourite grub that pairs supremely well with a juicy craft brew.

[Read more: Have hawker fare alongside affordable pints at this rooftop taproom in Beauty World]

More substantial bites come in the form of the meaty Shakshuka (S$14), with a vegetarian option available too that doesn’t sacrifice on taste. But it’s the Mother Cluckers (S$16), a Nashville-style spicy fried chicken served with mash and gravy, that is the ultimate indulgence. Added points for it complementing nicely with the cask ales.

For us, Good Intentions got it right with their special cask ale programme being the main draw, propped up well by a solid backbone of drinks and food selection done right. Simply put: you’ll definitely wanna come and try the cask ales, but then find yourself staying for the cocktails, craft beers, and food as well.