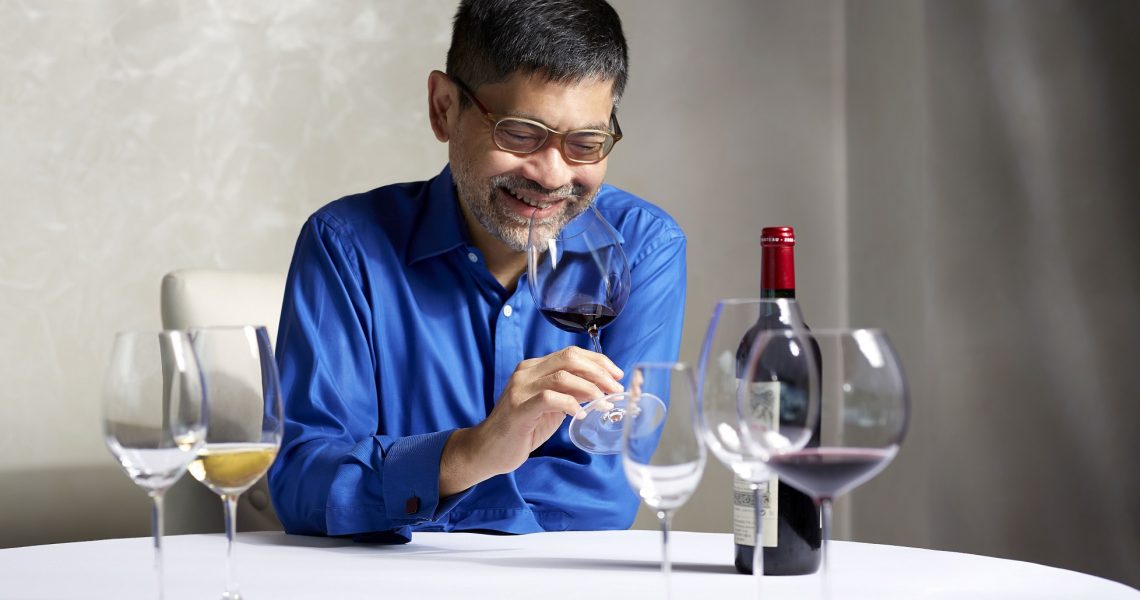 It’s always heartening to see a restaurant taking their wine programme seriously. At two-Michelin-starred Saint Pierre – who are definitely not sitting on their laurels despite their fresh victory – they’ve recently brought a special someone onboard as their wine consultant.

None other than Master of Wine (MW) Tan Ying Hsien, one of only 419 current MWs in the world (there are fewer MWs than people who have been to space), and the first Singaporean to have gotten the notoriously-difficult-to-attain accolade, is now the person behind their voraciously vast wine list of over 2,300 bottles.

I recently had the rare opportunity to sit down with the man himself for a 6-course wine pairing feast at Saint Pierre. It was a scrumptious meal from start to finish – think caviar, marron, and omi beef served in their signature style of opulent Asian-French fare.

To go with the dishes, we had 6 wines, each a masterful pairing by Tan. From a Grand Cru Blanc de Blancs champagne to go with the lavish caviar, to a 2019 Chateauneuf-du-Pape to go with the well-marbled beef, I was enthralled by the complexities of the wines themselves, as well as how they were enhanced when had with food.

The rich and oaky, yet fruity and peppery chardonnay from Cotes du Jura was especially pleasing and intriguing, which we feel highlights how Tan can lean towards being playful in his wine choices too, while maintaining Michelin-level quality in his selections.

With such a unique spread laid out in front of me, it’s almost easy to forget that this was all happening under the eyes of a MW – a wine god from the perspective of us mere grape juice-sipping mortals. Tasting wine in the presence of regular sommeliers is enough to make me select my words carefully, but drinking with a MW sat right opposite elicited a whole different level of anxiety.

In my mind, it will be all too easy to sound like a wine philistine. After all, my vino vocabulary must pale in comparison. And let’s not even begin talking about my undeveloped taste buds relative to his.

All this is happening at breakneck speed only in my head, of course. Tan’s relaxed demeanour and welcoming approach actually brought a natural calm to the table. Still, that’s not to say there wasn’t any pressure to bring to the fore the maximum potential my wine knowledge can muster.

Thankfully, after getting past the initial apprehensions – and after a couple glasses in – chatting and engaging with him was educational and mind-opening. His transitional journey from corporate law to wine was in itself an inspiring one, and it is telling how wine experts who are truly at the top of their game don’t require snobbery to assert themselves.

[Read more: Vino from Thai wine estate GranMonte has made its way to Singapore]

I found no airs about Tan despite his achievements and stature in the wine world. Being one of the first two Asian men to have attained the MW qualification, he is also considered a pioneer, having succeeded in a field long dominated by the West and their conventions.

As I’ve always advocated, tasting wine through an Asian lens and upbringing can be very different. Notes of fig and liquorice, for instance, aren’t readily familiar to most people living in Asia, yet show up in many wine tasting notes. What is considered ‘earthy’ or ‘foresty’ in aroma can be interpreted very differently too.

So Tan’s achievement as MW, which he got in 2015 after many attempts, is truly no small feat. It is also salient to know that even before this milestone, he was already a wine educator (he started and still runs Taberna Wine Academy since 2010) and consultant. This speaks volumes about how challenging the MW exam really is.

It’s great then that other than looking after Saint Pierre’s wine programme, Tan is also tasked with training the ground team, conducting wine tasting sessions and thematic tutorials in a bid to offer a more nuanced approach to the needs of guests.

I can’t wait to see how this will further add to the already stellar wine experience at Saint Pierre. And for all of us beginner and intermediate wine lovers out there, it’s always nice to get that MW level of finesse, breadth, and precision with their recommendations.

As for me personally, I’m just glad that I had the pleasure of having a wine pairing meal with Tan – it isn’t everyday when you get to pick the brains of a Singaporean MW. So despite the probable apprehensions, it’s something I’ll gladly do again.