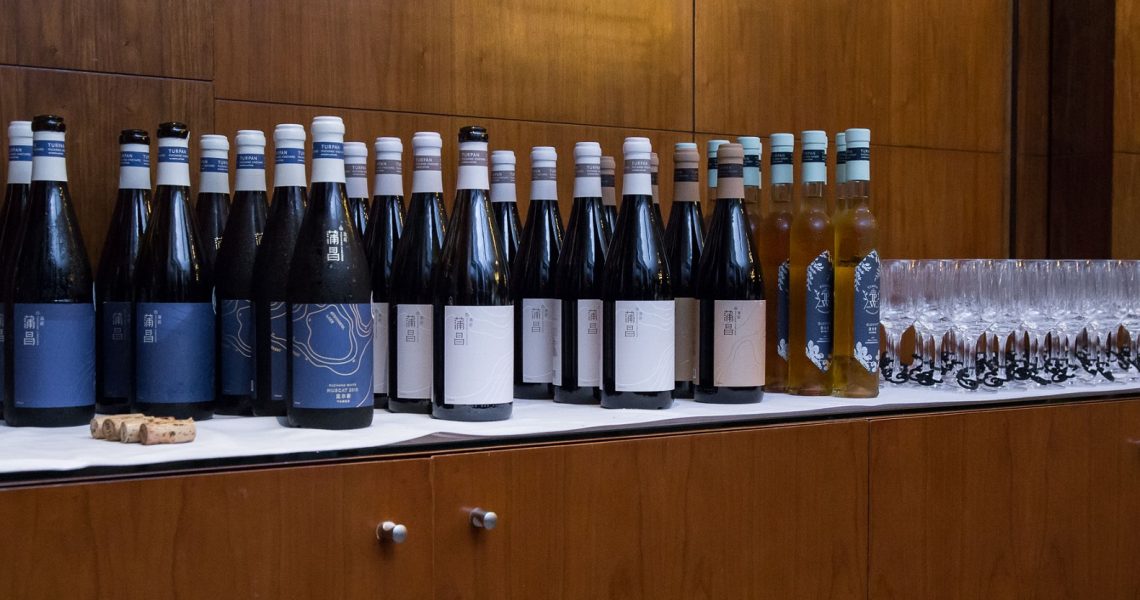 If winemaking regions around the world are green, then the Xinjiang Autonomous Region in northwestern China is anything but.

The place is a vast rocky desert, stark and desolate except where Puchang Vineyard stands. From above, the winery is a tiny, shimmering oasis in the barren landscape, an emerald fleck on the sheer landscape.

But Puchang does not defy nature. Rather, it works with it to make minimal intervention wines that both reflect and belie the severity of the region. They are delicate yet expressive, silky yet powerful, a quiet force that whispers the area’s rich history and culture while astounding wine professionals.

“I expected excessive marsala-like flavours. Raisin-y. Brutal. Aggressive,” says Geraldine Bablot, a sales manager at The Wine Distribution Co. (TWDC) in Singapore and whose “lifetime project” is selling wines from all parts of the winemaking world. “But it was so gentle. So supple and layered. It was a revelation.”

Puchang was originally a vineyard cultivated since 1975 in Turpan, a city in a mountain basin 30 metres above sea level and 150 kilometres southeast of the provincial capital Urumqi. The land has been inhabited by a melting pot of Indo-European, Mongols, and Han Chinese groups since the first millennium BCE, and was only part of modern-day China since 1949.

It’s also an environment that’s extremely hostile. The summer is long and the temperature peaks at around 50 degrees Celsius in July. In winter, it plunges to about minus 13 in January. June, their wettest month, gets a deluge of around 4mm of rain.

But the harsh climate makes the land tremendously fertile. The dry weather means crops are naturally free of most pests and diseases, and the abundant sunshine and large temperature swing allow fruits to fully ripen while preserving their natural acidity. If you’ve eaten raisins, hami melons, apricots, or dates from China, they probably came from Xinjiang.

This quality extends to the grapes at Puchang, which captivated Hong Kong businessman K.K. Cheung when he tried their wine. He acquired the property in 2008 with the aim of making incredible wine that would change the world’s perception that Chinese wine was terrible, a reputation that many still suffer from today.

Additionally, buying Puchang was a personal decision, says winery director and Cheung’s daughter, Clara Wang. “My mum was deployed to Xinjiang as a teenager during the Cultural Revolution. It plays a big part in (my parents’) memory.”

Puchang ticks many boxes as a modern, ecologically-conscious winery. It has been certified organic by the independent French organisation Ecocert since 2013. The vines, which spread across 67 hectares, are irrigated by channeling snowmelt from the nearby Tian Shan mountain range through an ancient underground canal system called Karez. Uprooted vines are shredded and turned into nutrients. The grapes are handpicked and manually sorted. No sulphur is added during the winemaking.

The winery is run by an international team of about 20 people led by head winemaker and Italian national Loris Tartaglia. They vinify two whites and four red grape varieties, which they turn into eight cuvees. There’s a cabernet sauvignon and pinot noir, as well as two indigenous white and red Georgian varieties (and their best sellers in China): rkatsiteli and saperavi. The first two are lush and vibrant, while the Georgians are aromatic and high in acidity.

But the most intriguing are their Chinese grapes. There’s a white called rodinshuang, which they translate into muscat, and it smells like a baklava crossed with a Japanese green grape gummy. Then there’s the red beichun, a hybrid of wild grapes from Jilin province and muscat from Xinjiang. It’s full of poise and soft spice while concealing an edge, like an iron fist in a rose-scented velvet glove. Beichun is also made into two other cuvees, Cibayi (not available in Singapore) and a sweet wine called The Clovine.

Puchang currently produces about 130,000 bottles annually, most of which are sold in high-end restaurants and luxury hotel chains in mainland China and Hong Kong. Singapore is currently their only export market – they also sold to London pre pandemic – where they’re listed by independent bars and retailers such as Freehouse, Le Bon Funk, RVLT, Temple Cellars, Set of Six, and Wines Online, alongside major groups like Marina Bay Sands.

Due to the focus on quality and limited production, Puchang’s wines command a premium. They sell from around 80 to 100 SGD in-store, and cost more when you order a bottle with your meal. But Bablot, who has been bringing in Puchang through TWDC since mid 2020, observes that demand has been consistent thanks to the wines’ appeal to two important buyers.

“Sommeliers are begging for stories,” she says. “They love that it’s a wine made in the Gobi Desert. But chefs are inspired by the muscat. It’s full of these flavours from the Silk Road. Orange blossom, acacia, rose water.”

Then there’s the political elephant in the room. Xinjiang has become a flashpoint between the West and China over alleged human rights abuses of the native Uyghur population, a Turk ethnic group that are largely muslim. The United States, European Union, Canada, and Britain have since imposed sanctions on Chinese officials, and fashion giants H&M and Nike have expressed concerns or stopped sourcing cotton from there.

Wang says the topic does not usually come up, not even in Hong Kong, which is facing its own issues around its identity and connection with mainland China. Only their London distributor has asked questions about forced labour. Still, she prefers the quiet approach.

Instead, Puchang aims to give back to the community. They learn from the residents on how to manage grape vines, and share knowledge on sustainable farming. They also work with both Han and Uyghur contract farmers “to achieve a win-win situation even in crisis times,” Wang points out.

“There was something wrong with the grape production one year and the small farmers had to sell really high,” she says. “My dad was the only one who paid the cost price.”

In Singapore, Bablot says only one retailer recently encountered backlash for selling Xinjiang wines, but she is adamant about offering Puchang.

“We should support things that seem inconceivable,” she says. “Why should we refuse to do business with them and leave them unemployed?”

Brinkmanship aside, Puchang wants to lower their production slightly, delve into more natural winemaking, and make styles such as skin-contact white wines while remaining unabashedly from Xinjiang.

Find out more about Puchang Vineyard on their website.