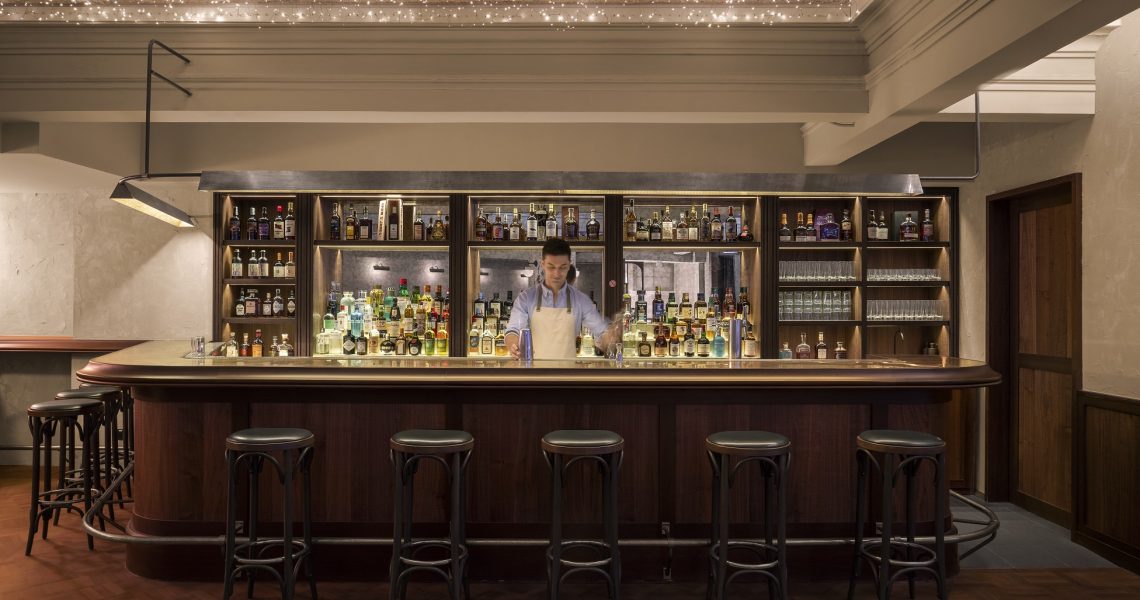 I vividly remember the first time I visited Sugarhall. Walking through its front door, I entered an elongated, dimly-lit space. The bar is where all the action’s at. Rum was flowing freely and the atmosphere was alive and electric. The smell of grilled meat wafted through the air.

I am referring to Sugarhall as it was back in 2014, when it first opened along Amoy Street, right next to the OG Jigger & Pony. Back then, both venues were much smaller – both in square feet and in influence. But everyone who visited loved them nonetheless, amassing a strong following in their four-year tenure there.

Sugarhall was then shuttered in 2018 (presumably due to landlord issues). But so enamoured was the following that they cried and longed for its return year after year. Even as the Jigger & Pony Group reopened their eponymous flagship bar at Amara Singapore, Sugarhall was nowhere to be found nor heard.

Fast forward to today, the wishes of the masses have come true, with Sugarhall finally reopened along Cecil Street, smack in downtown Singapore. Yet, the 2022 manifestation of this beloved rum institution is a very different one. A self-professed ‘rum-focused cocktail pub’, it is definitely not the same bar we knew.

Gone are the chequered shirts the bartenders donned that effused modern barnyardy vibes. Instead, 2022’s Sugarhall oozes modern old-school charm the way an English pub does. There is also no grill element either. Food comes from a shared kitchen with Rosemead (thankfully, the menu isn’t shared), the group’s latest foray into the restaurant side of things, located a floor below Sugarhall.

Dining at the new space now leans towards the sphere of elevated pub grub. Think Chicken Liver Toast (S$8), Curry Empanadas (S$8), and Spicy Pickles (S$7) and you’ll get the gist of it. For something more filling, the likes of Fried Chicken with Sweet-Sour Glaze (S$29) and Wagyu Cheese Burger with Bacon and Fries (S$35) will sort you out nicely.

But the drinks are why we’re really here. And as much as a part of us longs for a hit of nostalgia in that department, we think that the evolution of Sugarhall’s cocktail programming shows an awareness of how much the scene has evolved. Simply serving what they did before wouldn’t do, and they know this.

We thus applaud bar operations manager Davide Boncimino and principal bartender Sam Loh (a Sugarhall alumnus) for coming up with a cocktail menu that respects the individuality of the rums, rather than treating them as having a singular taste profile. Different rums are used differently, depending on their distinct nuances and attributes.

It’s nice too that the offerings run the gamut of serious reinvented classics through to fun mega-sized drinks as well as smashable punch bowls. So whether you’re in the mood for a fancy sipper or a quick chug, there’s something sure to tickle your fancy.

Being a rum-focused bar, must-haves like the Daiquiri (S$22) and Dark & Stormy (S$24) feature prominently on the menu. The latter of which is even available as a Mega Stormy (S$50), served to guests in a massive mug that holds three times as much liquid as the regular sized drink.

We appreciate that the Dark & Stormy (whether regular or mega) is given a craft touch as well, what with Sugarhall using a ginger beer brewed specially for them by local producers The 1925 Brewing Co. as a key ingredient. The ginger beer is in turn made using young, old, and galangal ginger with lager yeast and a blend of spices.

But we highly recommend going deeper into the menu’s pages and give drinks like the Il Presidente (S$28) and Cho-co N’ Oil (S$28) a go. Highly potent, spirit-forward, and full of character, these stood out to us as some of the best tipples available at Sugarhall. A couple of non-rum cocktails, such as the tequila-based Pommy’s Margarita (S$22), impressed as well.

For rum fans, checking out this place is a definite no-brainer. Yet, Sugarhall is keen on giving guests more reasons to come again and again with a super attractive Happy Hour (5.30pm-7pm; selected cocktails at S$14) and a changing monthly ‘Rum of the Month’ special.

The special works as a showcase of sorts. In April for instance, Appleton Estate takes centrestage, with their 15-, 21-, and 30-year expressions available neat as a flight for just S$50. A limited-time special cocktail made using Appleton Estate rum will also be available.

From its offerings, it should be obvious that the Sugarhall of today is indeed not the same bar we knew. Yet, even as we inevitably draw comparisons, it is perhaps not fair nor practicable to judge Sugarhall in its present form with what it formerly was.

After all, nostalgia can be a fallacy. Like a fond old memory blurred by the passing of time, we see it through rose-tinted glasses that are no longer wholly accurate. Galvanized by emotions so strong and concrete, we dare not risk reprising the thought that the new could actually be better, blinding us from what’s true and present.

But let fond memories remain. At the same time, let it not prevent us from seeing new possibilities. At least within the four walls of Sugarhall 2022, we know that we’re still among kindred spirits.

Many who visit present-day Sugarhall share that same amazing experience we all had many years ago on Amoy Street. And as long as the people keep coming back, then who knows, perhaps even better memories could be in the making.