The simple guide to appreciating baijiu 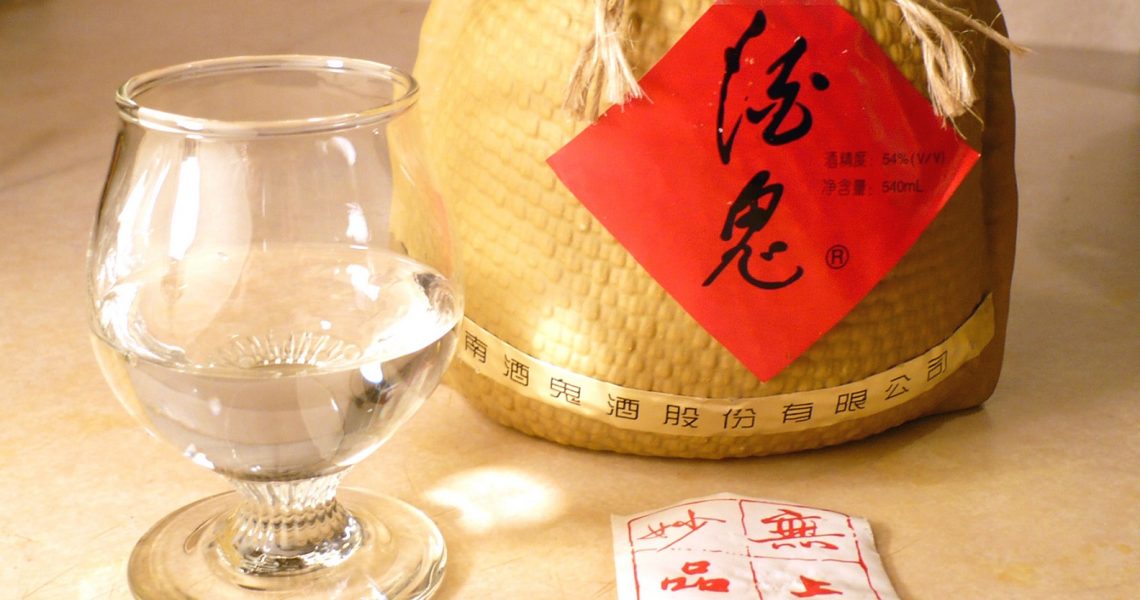 Top photo: A glass and bottle of Jiugui , a brand of baijiu, produced by the Hunan Jiugui Liquor Co. located in the Hunan province. Photo credit: Wikimedia Commons

Chances are, you hate baijiu. However, if you drink it the right way, you will come to enjoy the potent spirit in time to come.

As China continues its ascent, you are likely to have to clink glasses with a baijiu aficionado at some point in your career. Since cringing when clinking is likely to affect business relations, why not learn how to relish this nuanced spirit?

[Read more: Soju: What is it and why people love it]

Baijiu will be the new norm in time to come. The combined value of the world’s biggest alcohol players, AB InBev, Constellation, Diageo and Pernod Ricard is about USD$320 billion. That’s pittance compared to Kweichow Moutai, which alone is valued around USD$400 billion. Its arch rival, Wuliangye Yibin, is worth USD$153 billion.

From peasants to premiers, baijiu is almost solely consumed by China and Chinese diaspora, making it the most popular liquor in the world by volume. So you can bet it’ll be making waves internationally in the future.

Instead of saying no, say yes when you are offered baijiu. Still unsure? Follow these steps and you might have a change of mind:

1. Pour baijiu in a clear nosing glass and swirl it. Inhale its rich aroma. Observe how viscose it is. It looks like water, but it clings needily to its glass. The fluid that slides reluctantly back into the baijiu mass is coined ‘tears of wine’. This phenomenon is the result of the many kinds of minerals that baijiu absorbs from the earth.

2. Wet your whole mouth with a sip of the baijiu and swish it around.

4. Let the remaining baijiu evaporate from your mouth. The drink’s flavour profile will transform again. If you dab baijiu on your wrist, you’ll feel it evaporate quickly like perfume, so it’s not a good idea to leave your baijiu glass half drunk – just shoot it whenever the ‘gan bei’ order is given.

5. Take another swig and swallow. Superior baijiu won’t burn your throat like convenience store bourbon, but warm your belly like aged Scotch. When you breathe out, you’ll hardly small the baijiu, because carbon dioxide tends to annul this unique scent.

6. Add small drops of water to your glass of baijiu. Again, the smell, taste and finish of the baijiu will change, showcasing the multifaceted nature of this vaunted beverage. Note: These tasting steps don’t work on your average Grey Goose or Gordon’s.

Congratulations! You now fathom the immense depth of baijiu and might have picked up an exorbitant new hobby while you’re at it.

What sorcery is this? Long before the invention of the microscope, animists just knew that if they left their steamed sorghum grains in pits inside moist caves, they would yield an inebriating liquid.

The fermentation and subtle notes of baijiu are the doing of microbes that baijiu-making families have been protecting for centuries. Unlike yeast for brewing beer or whiskey, these unique microorganisms can’t be purchased. Which is to say, if disaster wiped out the caves of a baijiu brand, that brand’s story ends there and then.

The caves where this intricate delicacy is fermented and aged are monitored 24/7. This is not just to safeguard the product and catalysts. Much more vigilant artisans than Dom Pierre Perignon, baijiu craftsmen have to ensure that conditions in these caves are always optimal. The temperature has to be maintained around 20 degrees Celsius, humidity around 85%, plus air flow cannot be too strong.

Like Cognac, the preparation of baijiu has to be planned generations in advance. Luzhou Laojiao, for example, has been toiling in these cold, dark and damp caves for 23 generations. They mix steamed sorghum grains, with water and a fermenting agent called jiuqu, which yields both simple sugars (saccharification) and alcohol (fermentation).

When the master distiller deems a batch suitable for making into baijiu, which might be several years or even several hundred years later, he draws the mixture from its pit and brews it in traditional vessels. After ageing it for another three to six months, the mixture is boiled and its condensate is ready for consumption.

Like most things Chinese, baijiu making is governed by the principles of fengshui. You might notice that this process involves the five elements: earth (pits in the caves), fire (baijiu was also known as shaojiu, because of the boiling involved), wind (air flowing gently through the caves), water (added to the unboiled mixture) and metal (the boiling and distilling apparatus).

Like French wine, terroir is the cornerstone of baijiu preparation. For this reason, fans of baijiu from Renhuai in Guizhou Province, for instance, might be averse to drinking produce from Phoenix Mountain in Sichuan Province, where the water’s mineral content and climate are different.

Baijiu pre-dates recorded Chinese history – even the Chinese aren’t sure when they began making baijiu – all they remember is that they’ve been making moonshine for at least 9,000 years.

Most baijiu companies trace their history back to the Ming Dynasty (1368 – 1644), when the Chinese discovered that boiling and distilling their fermented beverages was a better idea than drinking the whole hodgepodge.

Baijiu would eventually supplant huangjiu (‘yellow wine’ that is not distilled) which was formerly the choice drink of nobility. There is nary a piece of baijiu marketing that doesn’t harp on baijiu’s regal standing.

If you play the market, you should consider including baijiu stock into your portfolio. After all, baijiu stock has been booming. As mentioned, frontrunner Kweichow Moutai is worth almost a third of a trillion dollars, and it’s still skyrocketing – this year alone, it’s grown more than 30%, leaving Nestle (USD$93.4 billion) and P&G (USD$71 billion) in the dust.

Consumed mostly by older adults, baijiu brands are trying to resonate with younger imbibers, albeit unsuccessfully. But the winds of change are already blowing.

Still wincing at the thought of baijiu? Baijiu is more affable when made into a cocktail. Follow these following two recipes to impress your uninitiated friends.

Baijiu Mojito
A nuanced ‘beach vibes’ drink that both cocktail connoisseurs and teen clubbers can enjoy.

Steps:
Separate the egg white from the yolk – you can learn different ways of doing this from YouTube. Mix the egg white with the baijiu, lemon juice, sugar syrup and ice and shake well. Strain the mixture and garnish with the cherry. If you like cocktails with thick, frothy heads, shake more egg whites and pour that on top.