What are natural sakes, and why one man has made purveying it his mission 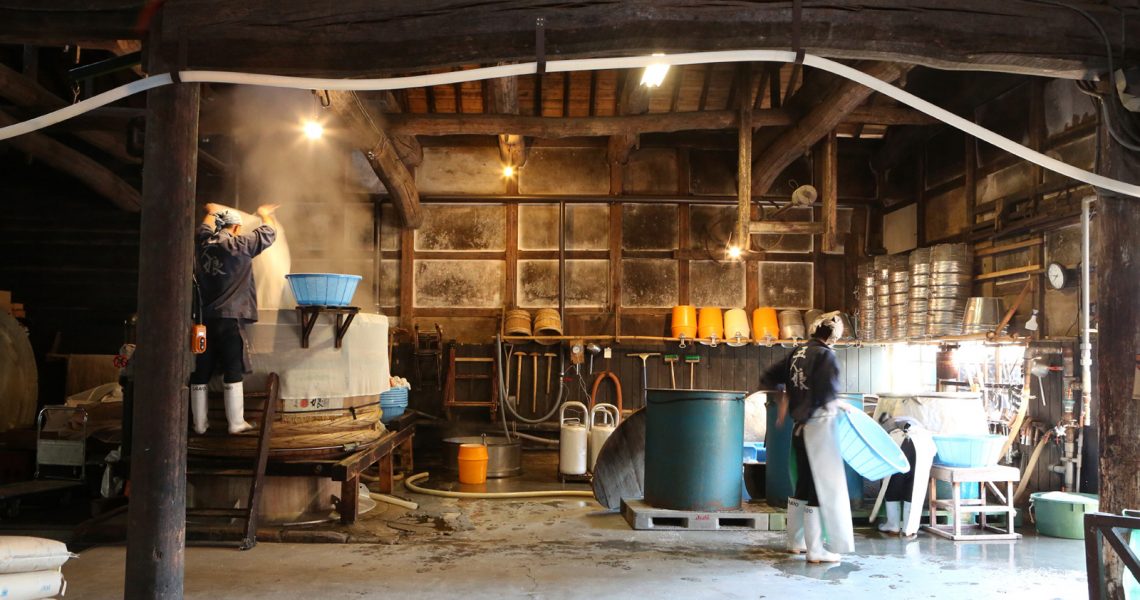 Above image: Inside the Terada Honke brewery

Natural wines. Love ‘em or hate ‘em, they are an indisputable force in the wine world. Especially loved by a younger, more adventurous generation of drinkers, imbibing the latest labels from esteemed independent winemakers is now seen as a hallmark of taste and worldliness.

Not many are aware of sake’s equivalent though. To be fair, little has been said regarding what even qualifies as natural sake, or shizenshu. Perhaps it’s not surprising, given how even natural wines and its legions of devotees are still oftentimes navigating murky waters regarding definitions.

But one thing everyone can agree on is what natural wine (and by extension, natural sake) stands for. They represent winemaking done using traditional methods and without the use of additives. That true-to-nature approach belies a big part of their charm, and the reason why some prefer calling natural wines using the more self-explanatory but more cumbersome term, minimal intervention wines.

That same charm can be a huge deal in the sake world. It is thus the reason why slowly, but surely, more and more are giving natural sakes the time of day even as clear definitions about what they are remains as cloudy as nigori.

To understand more about natural sake, we need look no further than Julian Goh, 32, the proprietor of sake purveyor Saketen (which means “liquor store” in Japanese) based in Singapore. Through this set-up, he intends to spread the joy and appreciation he has for natural sakes with as many as he can.

“Sake resonated with me more than wine or other alcohol. I guess it’s because we (Asians) eat more rice than we eat grapes,” he says jokingly, when asked why he ventured into this line of work in the first place. At the time of writing this article, it has only been about a year and a half since Saketen was founded.

Originally cutting his teeth and cooking up a storm at places like Mustard Seed and Kamoshita, among others, his experiences at restaurants was what exposed him to a world of flavours. Pairings with wines and sakes was naturally also a part of the job. “Chefs appreciate flavour,” quips Goh.

Natural sake exporters who worked with him found he could understand their products well as he expertly paired them with local food. So when they were looking for local distributors, they naturally looked to him for guidance. Yet, even as he approached existing players and asked them if they would like to carry any, none took up the offer.

Not satisfied with that outcome, he decided to take it upon himself to distribute the natural sake labels that he loved, even though he had no intention to do so at the start. And thus, Saketen was founded.

Perhaps it was kismet. Says Goh: “It’s about distributing things that I believe in. It may be cliché to say, but I didn’t choose this life. It chose me.”

The question remains: what in the world are natural sakes? The overly brief and short answer is that they are all junmai (pure rice) sakes made using traditional brewing methods. But that answer does it little justice.

Similar to the tenets of natural wines, natural sakes are made with raw ingredients (in this case rice) cultivated without the use of chemicals, contain no additives (such as brewer’s alcohol), and are more often than not unpasteurized, unfiltered, and undiluted. There are exceptions, of course, and that’s where some of the cloudiness sets in.

“It’s difficult not to pigeon hole things,” remarks Goh, adding that this lack of clarity is what contributes to the uphill battle he faces when distributing his wares. Yet he finds that natural sakes are worth pursuing as they often offer greater depth of flavour compared to sometimes one-dimensional commercial brews.

This is due to natural sake brewers introducing less artificial steps into the process, as well as doing things like using indegineous rice varietals and polishing their grains less. Goh explains: “Charcoal filters and the like stabilise sake but also take away flavours. Many conventional sakes are also heavily polished for their aromas, but they are lost quickly over time.”

Some producers, such as Akishika Shuzo from Osaka, go above and beyond by growing their own rice and tending to their own paddy fields. From seedling to sake, toji Hiroaki Oku keeps all aspects of his sake production in-house – his fertilisers are even made by upcycling rice husks and lees.

[Read more: Daishichi, the sake brewery defying the mainstream in pursuit of their craft]

Further going against conventional wisdom that sakes shouldn’t be drank too long after production, his sakes are often matured for years before even hitting store shelves. The flagship Okushika, for instance, is bottled and aged for 6 years before release. The result is an incredibly rich and complex brew with layers of sweet spice and vibrant acidity, plus just a hint of smoke.

When it comes to natural sakes, the breaking of rules doesn’t end there. “A lot of my sakes are also made using table rice,” adds Goh. “Unlike sake rice, the starch, fat, and proteins in table rice are more evenly abundant.”

Case in point: the Usagi from Miyako-Bijin, a brewery hailing from Awaji Island. With a polishing ratio of only 70%, made using mostly table rice and wild yeasts from Awaji Island, and rested in the brewery at room temperature, this wildly unorthodox brew is recommended as an excellent pairing with cheese.

In an environment where polishing ratios, aromatics, and recognisable brand names dominate the conversation regarding quality, natural sakes turn the rules on its head and prove that defying the norms can produce delicious results too.

Goh believes that natural sakes are a boon for the sake scene in general, and complements the market’s existing sake offerings. “Don’t fight for the slice, increase the pie,” he says astutely. “Not only am I adding value to the industry by offering something different, the best part is that I learn from my clients as well, and it becomes a virtuous cycle.”

Working with restaurants especially, one thing he has found is that natural sakes tend to be able to accommodate to a greater range of flavour profiles when it comes to pairings.

The Ine Mankai sake from Mukai Shuzo in Kyoto, for instance, is made from an ancient indigenous strain of red rice, and can pair equally well with steak or dessert. “Our sakes are more food friendly and works with a broader spectrum,” says Goh. This has the added benefit of making them more approachable to more people.

Despite that approachability, natural sakes are still far from commonplace. For one, where are all the natural sake bars at? Natural wine bars are all the rage, allowing them to become an organic touch point for end-consumers to interact with and learn more about the category. But natural sakes have had no such advent. At least not yet.

The good news is, while Goh’s Saketen remains largely a B2B business, he is already on the lookout for a physical space offering retail and bar. He also intends to launch an e-commerce store this year. If you’re really hoping to get your hands on bottles right now however, Fossa Provisions is already retailing some of Saketen’s goods online, while venues like Esora and Bar Cicheti carry natural sake labels too.

The biggest obstacle natural sakes face in getting its moment in the sun remains an intellectual one. Not all are able to wrap their minds around and get onboard with the concept.

To those who are still contending with the idea, Goh offers some nuggets of wisdom through song – a line heard in ‘Giorgio by Moroder’, a track in legendary electronic dance duo Daft Punk’s 2013 album Random Access Memories:

“Once you free your mind about the concept of harmony and of music being correct, you can do whatever you want.”