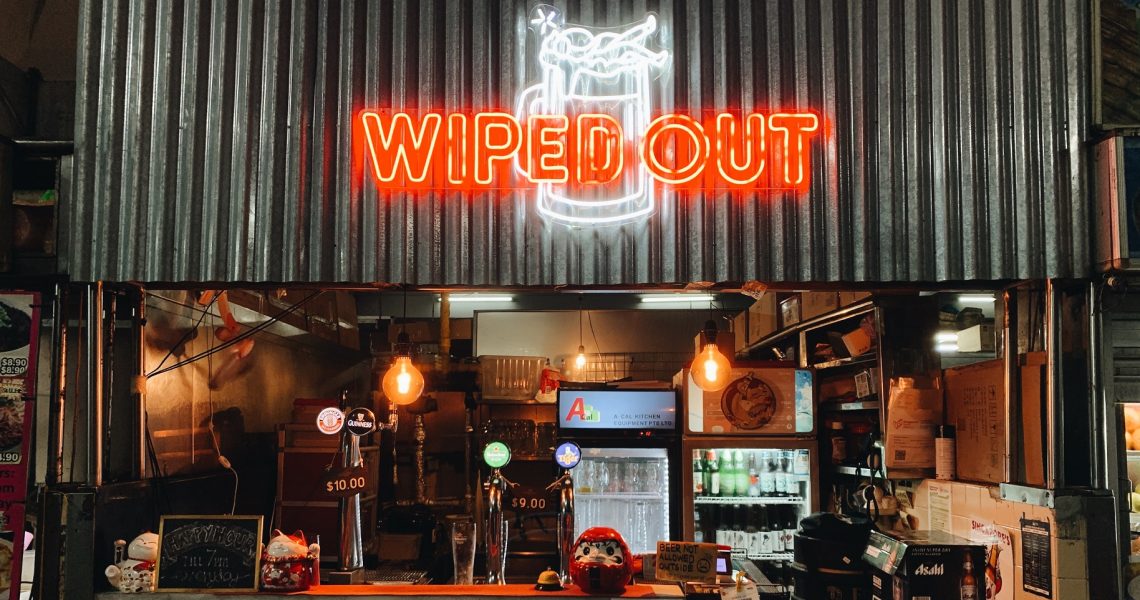 It all started because he wanted a pint of Guinness. When Covid-19 hit in early 2020, 29-year-old Adrian Tan found himself newly reluctant to venture too far for beers with girlfriend, Olivia Tang. Travelling felt like an unnecessary risk for just a few pints, so they started hunting around the ‘hood for local pubs and kopitiams where they could go for a couple of casual beers.

It wasn’t long before they realised there was a dearth of decent, affordable watering holes. “That’s when we thought we should open a place in the neighborhood, so people can go have a drink easily,” says Tan.

Their search brought them to the charmingly old-school Beauty World Centre, home to Singapore’s only rooftop hawker centre. Quickly recognising the potential of the space, Tan immediately put his John Hancock on the contract, but opening was hampered by delays, no thanks to the still-raging pandemic. Renovations were slow-going due to lack of manpower, but Wiped Out finally debuted 2 months later on 12th December 2020.

When you visit, the bar is unmistakably modern – you can’t miss it. The cool industrial aesthetics of bare concrete and corrugated steel instantly distinguishes Wiped Out from its much more traditional-looking neighbours. Adrian credits Wiped Out’s stylish exterior to Olivia, who’s also responsible for designing its playful logo, emblazoned in neon above the stall.

It’s a bright, energising presence in the sleepy hawker centre. In fact, it probably is at least partially responsible for rejuvenating the 80s-built food centre into a burgeoning heartland hotspot. Since they’ve opened, more new and eclectic tenants, like Mediterranean fast food Hapiha and Feng Xiang, a Klang-style bak kut teh joint, have come in.

Unlike most of its contemporaries like Alibabar, this hawker taproom was designed to appeal to the everyman drinker, rather than the craft beer connoisseur. For his unapologetically mainstream brews, Adrian turned to Asia Pacific Breweries, installing four taps for Guinness, Erdinger, Heineken, and Tiger.

Of course, the first pour he made was for himself – that long-awaited pint of cold, dark Guinness. He’s also adamant about keeping prices friendly as much as possible. Indeed, there aren’t many places where you can get a fresh draught of Guinness, or Erdinger, for just S$10 (S$8.80 during Happy Hour).

If you’re after craft though, they’ve assembled a fairly respectable menu of bottled beers which includes Wychwood’s Hobgoblin IPA and Heart of Darkness’ Dream Alone Pale Ale. Singapore’s own Brewlander is also well-represented, with three of its beers on offer.

“Brewlander was introduced to us by a customer, actually,” reveals Tan. “(He’s) friends with our sales guy, and he came with some beer samples, which we quite liked. Plus, Brewlander is a local brand as well, (so) we thought of sharing this with our customers.”

Undoubtedly a dark beer lover through and through, Tan favours Brewlander’s Respect Porter out of the three. “I like the cocoa and coffee flavours,” he grinned. To “welcome all kinds of drinkers”, there’s also Tatchers Cider. “Don’t you find it tastes like moscato?” he asked of Tatchers Katy, a medium dry cider made from Katy dessert apples. Yes, quite, actually.

One of Wiped Out’s biggest draws has to be Wiped Outside, its new al fresco area that finally saw the light of day in October, after waiting for the space to be available for nearly a year. The 20-something-seater is half rooftop bar, half industrial-style beer garden, dotted with hefty steel drums for tables.

There are simple but good beer bites like nuggets and tater tots available (the chicken karaage, this writer’s favourite snack, is sadly ‘wiped out’ till further notice). Hungry for something more substantial? Tan is, luckily, much more relaxed about ordering from other stalls than next door’s Korean beer garden Pink Candy. North Indian cuisine Dhaba1376 is recommended – ice cold beer is a handy salve to a fiery hot curry after all.

Italian-Albanian eatery Hapiha’s pizzas are a natural, easy-to-share option too, but I was surprised to hear that You Peng’s xiao long baos (sans caviar, though) were also very popular, judging from the amount of bamboo steamer baskets they’re clearing each night. (Wait a minute, are there still diners incapable of picking up after themselves?)

For the first few weeks since opening, I’ve seen perpetual queues for the outdoor seating area almost daily. (Full disclosure: yes, this is my local pub.) Besides sheer novelty, there’s also the uncommon-for-here sunset view and the gentle breeze that lifts as evening approaches. Tan admitted it wasn’t easy to adjust to the sudden influx of new customers, but he and his staff have a better handle on it now.

What’s also challenging is that Wiped Outside is unsheltered, so the open-air space is totally at the mercy of the elements. There’ve been quite a number of days they couldn’t set up due to rain, and on sunny days, customers also have to contend with the full force of the blazing sun. And just a few meters away is the formidable wok’s breath of Feng Xiang, which produces an impressive billow of eye-stinging smoke from time to time.

Still, none of this compares to the difficulties wreaked by the Coronavirus. “The biggest challenge was Covid-19. We’re always afraid of having a lockdown or ‘no dine-in’. At the same time, people are more prone to having takeaways and ordering deliveries. As we are providing fresh draft beers to customers, we’re afraid that people don’t want to dine out.”

With so many F&B businesses closing this year, we’re hoping Wiped Out will stick around for a while. After all, for a neighbourhood pint of Guinness, there’s no place higher on my list.