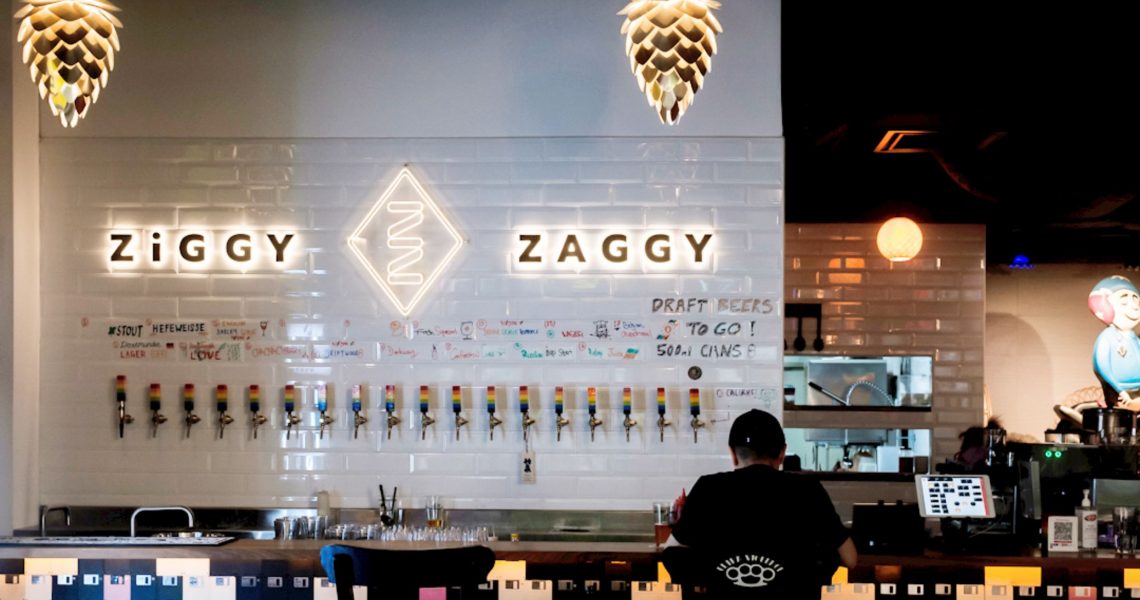 Getting to the Kampung Bugis enclave can be a tall order for some. Though far-flung, it rewards those who venture there with balmy riverside views, solace from the hustle and bustle of the city centre, and now, with craft beers poured fresh from the taps of gastrobar Ziggy Zaggy.

The neighbourly joint is opened by musician and all-round craft beer fan Ngak Ng, who says he got inspired to name the venue Ziggy Zaggy not because of the way one might walk after a couple of strong pints, but because of the way a certain popular Oktoberfest chant sounds (zigge zagge, oi oi oi!).

While you’ll likely not encounter any Bavarian boisterousness here, the gastrobar does exude that same sort of welcoming quality you’d expect at a festival dedicated to beer.

The moment you enter the double glass doors of Ziggy Zaggy, you’ll first notice the giant mural of a baby boy (it’s actually Ng’s little one) spanning the entirety of the right wall, before being enticed by the rainbow-hued taps at the bar directly in front of you.

Pouring from its 16 taps (and 1 additional secret tap) are a good selection of beers (available in 330ml, 473ml, and even 1 litre) that span the gamut of styles and regions. Whether you’re looking for sessionable saisons or imperial stouts, local creations or hidden finds from international breweries, you’ll find them here.

What was kegging during our visit were the likes of Alive Brewing, Friends Company, Niang Brewery Co, Rocky Ridge, and more. A real treat were the ones from Norwegian brewery Nøgne Ø, which Ziggy Zaggy dedicated not one, not two, but six taps to.

It’s commendable that it’s not just the usual stuff too. From dry ciders and robust porters, to barleywine matured in whiskey casks and port wine barrel-aged sours, there’s so much for the esoteric drinker to explore and love.

While you’ll never know what the rotating taps will offer (check out their updated tap list if you want), the curation so far has impressed, and it’s this tone they’ve set that will draw craft beer folks back again and again for more.

Then there’s the amazing grub to go with all that booze. Partnering with well-known Singapore biker bar Handlebar for their food menu, the kitchen dishes out unpretentious, comforting nosh that hits all the right spots.

From pastas and pizzas, to all day breakfast items and meaty burgers, the options here are as hearty as they come. Start with the Cod Fish basket (S$14) and Hot Wings (S$16) for satisfying starters to go with your first pint, or even a Mac & Cheese (S$13) if you’re feeling especially peckish.

You’ll not want to miss out on the mains though. Go straight for the Short Ribs (S$38) for the ultimate hands-on messy indulgence. Meanwhile, those looking for a safe bet can try the Fish & Chips (S$18), which has pacific dory deep fried in craft beer batter for extra crisp.

But trust us and get the Biscuit and Gravy (S$16) with fried chicken steak (S$8 add-on) too. It looks like a supreme mess, but is exploding with flavour. The fact that this great combo of pork sausage gravy with homemade biscuits and oh-so tender chicken is not common to find in Singapore makes it an even more indulgent treat.

And if you, like us, might be hankering for more drinks rather than dessert after all that food, a small but dandy selection of wines, sakes, and packaged beers will sort you out nicely. Of course, there’s always still that imperial stout on tap you can get another round of.

On the surface alone, Ziggy Zaggy is an excellent convergence of many things one would want from a destination dining and drinking spot – scenery, the right vibes, and ice cold beer. But it’s the effortlessly welcoming atmosphere that truly draws you in.

Having the perfect balance of neighbourly charm plus quality good food and drink more commonly found at popular downtown spots can be a hard act to pull, but Ziggy Zaggy manages to check the boxes where it counts, making the jaunt to its Kampung Bugis locale ever more rewarding.

[Read more: Have craft beers, cocktails and wines alongside heritage cuisine at Rempapa]