At Drunken Farmer, a meeting of natural wines and stellar breads 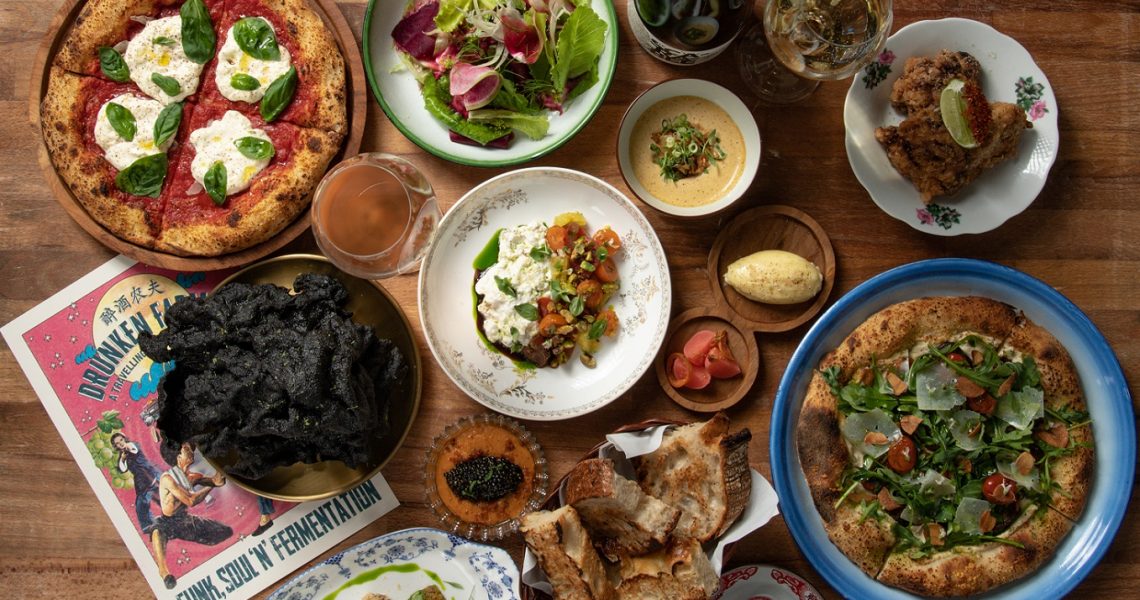 In the 1987 Hong Kong kung fu comedy movie Drunken Master, the hero Wong Fei-hung (played by a young, perm-spotting Jackie Chan) is an underdog who has to defeat a series of stronger and stronger challengers.

It’s a similar situation at Drunken Farmer, a new wine bar and bistro in Singapore inspired by reel-life tipsy martial artists (the restaurant projects their films on the wall), where the star is the lowly pizza crust. Other dishes may try to upstage it – the jet black squid ink crackers, the juicy sourdough chicken karaage – but the crust lands the knockout blow.

It throws salty and sour punches then delivers an airy and chewy bite. The toppings on the pie may try to outshine it – there are five different styles from margherita to ricotta and dried tomatoes – but ignore them for now. Instead, tear the crust off and douse it in olive oil or just have it neat. It is that good.

But the crust didn’t gain its powers overnight. In the movie, a wizened master named Beggar So teaches Wong how to fight. In Drunken Farmer’s case, it’s a 159-year-old sourdough starter. Not only does it shape the pizza crust into a winner, it makes all the bread there so alluring.

It gives the sourdough couvert, a basket of rye, cereal, and focaccia slices, a delightful texture. It elevates the already good karaage. It lends a lovely tartness to the sourdough waffles that balances out the gula jawa caramel and banana ice cream topping.

You shouldn’t be surprised that the kitchen knows their way around dough; Drunken Farmer is opened by the Spa Esprit Group, the same people behind Tiong Bahru Bakery and Le Vin Levain, the bread-centric pop up at the bakery’s Eng Hoon location. Drunken Farmer now shares its home with Common Man Stan cafe, another Spa Esprit brand.

Other dishes are less successful. The squid ink crackers sound brilliant in theory, but lack the expected briney punch. Fried chicken is usually a winner, but this example was unevenly seasoned. The pizzas are fine if they exist in a vacuum, but are rather pedestrian when compared to other joints like Chooby and Small’s.

[Read more: How Puchang Vineyard is defying the odds in harsh and turbulent Xinjiang]

Thankfully, many options come with dips and spreads, which are a draw. Order the heirloom tomatoes just for the goat cheese, which is soft and creamy without a trace of funk. The prawn dip accompanying the squid ink crackers is utterly savoury. And the house churned butter served with the couvert is best described as cloud-like.

There’s a thoughtful selection of natural wine, especially under the sparkling section. After all, Drunken Farmer started out as an online retailer highlighting small artisanal producers and many of them are featured here.

The bolder dishes demand an expressive blanc de noirs by Champagne Fleury, which is brimming with white flowers and brioche. Another option is Bodega Cueva’s Brutal Ancestral, a Spanish blend of moscatel and macabeo that’s like dipping ripe pineapple in sour plum powder. From Alsace, Domaine Binner makes the joyful Le Scarabée Qui Bulle that cozies up to the karaage and the waffles.

Perhaps that’s what Drunken Farmer does best. It feels fun, from the staff in baseball jerseys to its celebration of the humble loaf. Like Wong, Drunken Farmer may not be on top now, but would eventually kick ass.