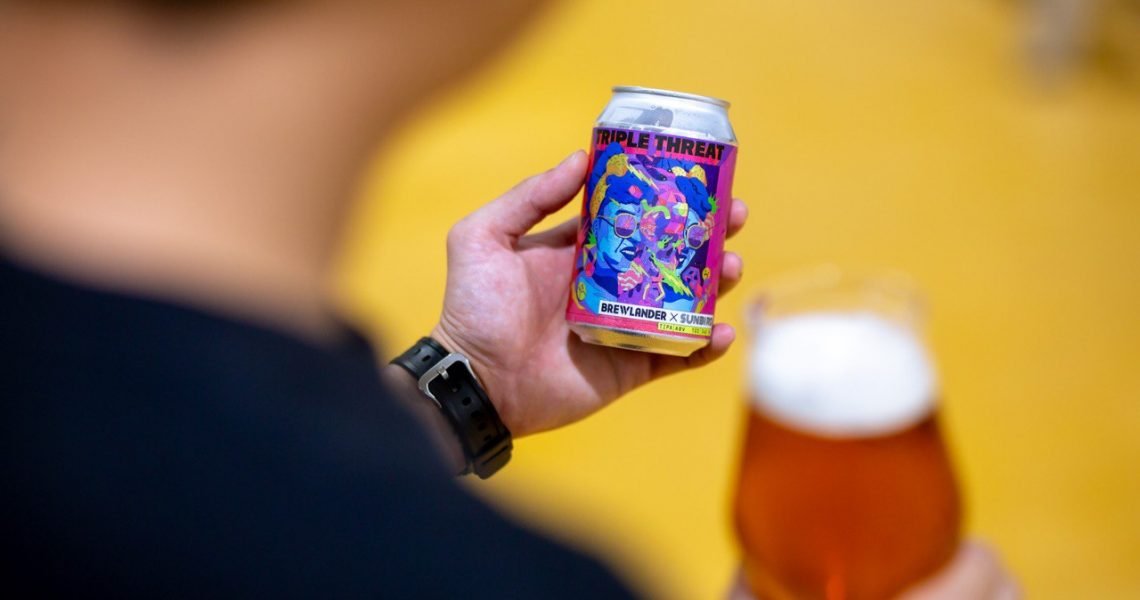 After not one, not two, but three rounds of dine-in bans as part of Singapore’s efforts to contain the spread of Covid-19, the F&B industry, and by extension, the craft beer brewing sector, has been decimated.

Even as brewers try to claim what is equitable to them, all while doing their darndest to keep doing what they do best (i.e. brew beer), two local breweries – Brewlander and Sunbird Brewing Co – have teamed up to make a beer that seeks to remind us of one important thing: to remember to take care of our own well-being.

In a nod towards the trifecta of lockdowns they faced, they’ve named this hopeful collaborative brew the Triple Threat IPA, and dedicated the beer to all of Singapore’s F&B heroes whose mental well-being and livelihoods have come under threat during this time.

Combining their expertise, they’ve created the Triple Threat IPA, a medium-bodied triple IPA (TIPA) style, that’s meant to be quaffable even though it boasts a respectable 10% ABV. Unlike most triple IPAs on the market, this isn’t a hop bomb of a beer, but a balanced brew where you can go for seconds and even thirds.

The stars of the show are the rare El-Dorado, Idaho 7, and Nelson Sauvin hops used in making the beer. Rather than the usual varieties, the two breweries have chosen these unconventional ones as a way to challenge themselves, as well as to offer something different to the market.

“The easy-to-use hops won’t disappoint, but that would have been too lazy and convenient,” says John Wei, founder of Brewlander. “So we thought, why not challenge ourselves, especially since we’re making a collaboration beer.”

Head brewer and director of Sunbird Brewing Co, Clive Tan, adds: “We also want to do something fun with these rare hops. To form a complete flavour, we sought to layer them and form a harmonious blend.”

The result is a beer that brims with bright tropical fruit flavours, with a dank hoppy bitterness that doesn’t overpower the palate the way many TIPAs do. There’s an illusion of sweetness too, thanks to the balanced profile and fruity tones, even though the beer isn’t actually sweet.

Shares Wei regarding the message behind the collab beer: “We understand how tough it can get during these times and we wanted people to not lose hope and instead, to soldier on together and have a little fun while we’re at it because we will emerge stronger from this.”

For Tan, that missive is all the more salient, as they’ve recently opened their own taproom and restaurant in Ang Mo Kio, even amidst the pandemic-hit economy. “…I am experiencing first-hand all the challenges our fellow F&B owners have been through,” he says.

“Together, we can achieve more and that is why we are so thrilled to work together with John and his team from Brewlander to lift up the good spirits in everybody during such trying times.”

The Triple Threat IPA is now available in cans and on draft, via Brewlander’s and Sunbird Brewing Co’s own online stores, as well as at venues such as Good Luck, Orh Gao Taproom, Smith Street Taps, and Crimson by Sunbird.