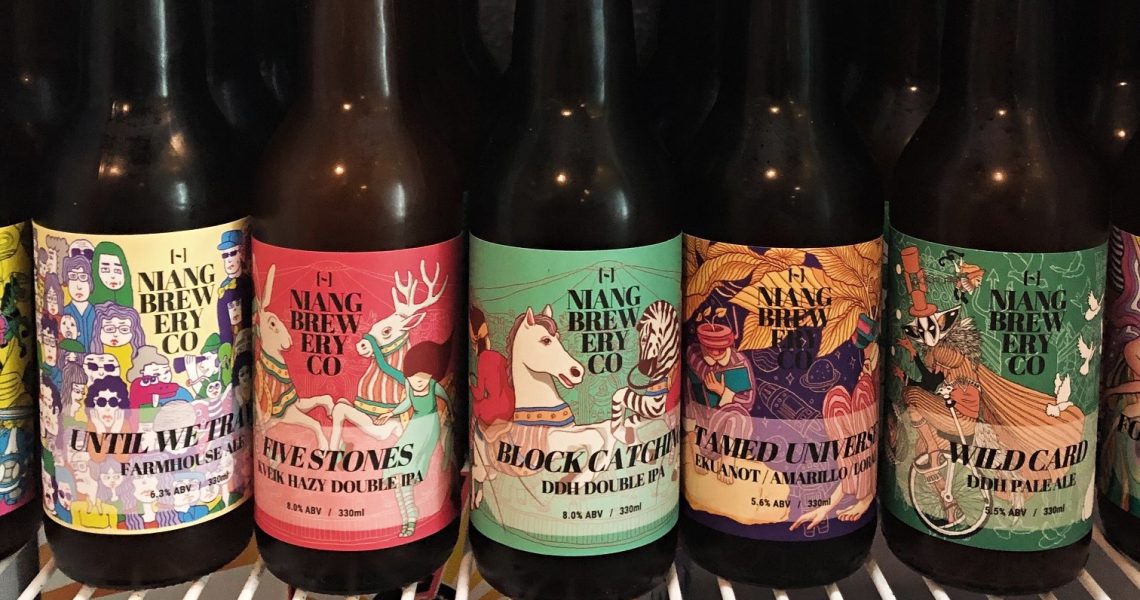 We still remember when Niang Brewery Co, a beer brand started by intrepid Singaporean brewer Mark Chen, first came onto the scene back in Nov 2020.

Armed with just a pale ale and a saison back then, he made a splash with his eye-catching bottle labels, beer food pairings, and personal stories behind each and every beer he makes. And he has released quite a few since launch.

One year on, none of the things which makes Niang unique has waned. Rather, Chen has stayed the course, doubling down on what makes his brand of beers stand out, with three new beers that are sure to satiate the thirst of hopheads.

The lightest in ABV (5.6%) of the trio is Tamed Universe, a bright and zesty IPA that packs plenty of complexity into each bottle through a play on various hop profiles. Ekuanot, Amarillo, and Loral varieties are all used, resulting in enticing green, citrus and herbal tones with each refreshing sip.

Then there’s the Block Catching (yes, it’s named after the childhood game), a DDH Double IPA (8% ABV) that marries both New England and West Coast IPA styles into one bold bottle. Find a smorgasbord of tropical fruit flavours in this one, balanced out with a fresh nose of pine and an incredibly layered texture.

Finally, there’s our favourite, Five Stones. The alter ego of Block Catching (thus they’re both named after childhood games), the first thing you’ll notice about this Hazy Double IPA (also at 8% ABV) is that it’s made using Kveik yeast, a Norwegian farmhouse strain that ferments well at high temperatures. It’s everything you’d want in a beer such as this: a luscious resin bomb best drank in large gratifying gulps.

As usual, Chen recommends having his beers with food, as a way to make it accessible to everyone’s everyday. Try having dishes like Korean fried chicken with the Tamed Universe, Peking duck with Block Catching, and a jalapeno bacon cheeseburger with the Five Stones.

But don’t stop there. Feel free to explore more food pairings. It is Chen’s hope that craft beer be something best enjoyed regularly as part of daily life, whether when you’re dining at the hawker or kicking back with your favourite Netflix steam.

To paraphrase the man: “It is my wish that one day, craft beer can be simply called beer.”

Niang Brewery Co’s beers can be found on their website, as well as at bars, bottleshops and taprooms like BunkerBunker, Orh Gao Taproom, Temple Cellars, and more.