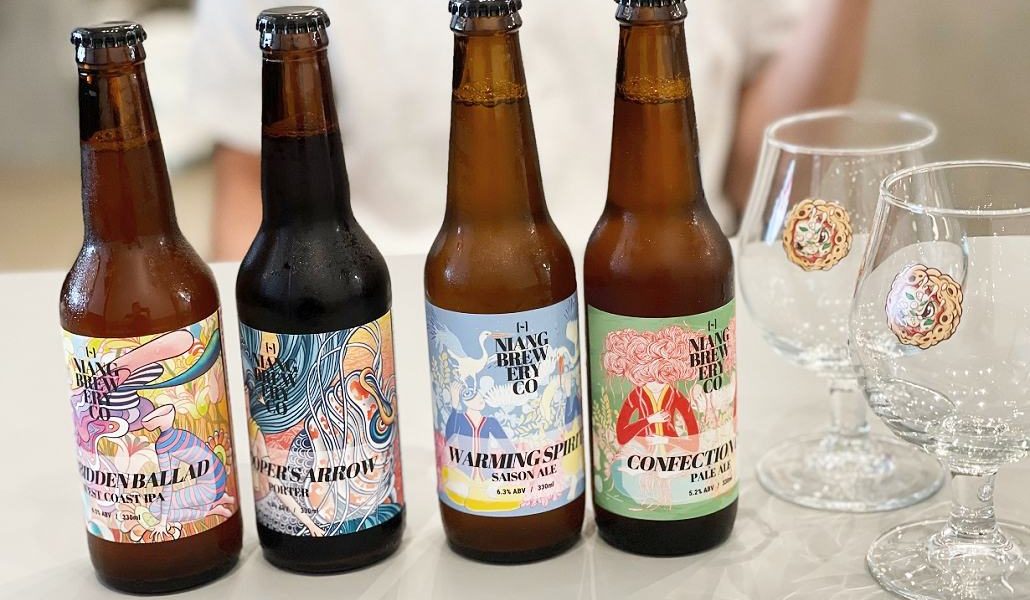 It’s been a hot minute since Singapore outfit Niang Brewery Co arrived on the scene, making their official debut in Nov 2020 with two beers – a pale ale and a saison – featuring whimsical bottle label designs that are unlike any we’ve seen before.

When asked if these make up his core range, Chen is taking a wait-and-see approach, stating that he may or may not remake all of them. Or even if he does, it may not be done in the same way it was first made. He prefers to continually tweak and improve his recipes.

This is due to his approach as a brewer. “The story I want to tell defines the style I eventually make. I didn’t choose the styles first, rather, I first decided on the flavours that best portray my narrative before arriving at the style,” says Chen. “So I think of the story, the experience first, then recreate that in a beer.”

He uses his newly launched West Coast IPA as an example. “This style is more suitable for my narrative as it has piney and fresh forest notes in addition to fruitiness, rather than a New England IPA for instance, that is more a punch of fruits like mango and pineapple.”

The pine and forest notes are important to Chen, as the Forbidden Ballad is named after his memories as a child playing at his grandmother’s home. Back then, he was forbidden from heading to the back of the landed property. As a kid, he imagined that spirits dwelled in the forestry behind, therefore the restriction.

And like a ballad that plays flittingly in your head, this memory stuck with Chen till this day, not knowing the true reason why he wasn’t allowed to explore that particular part of the house.

Meanwhile, the Trooper’s Arrow is inspired by the medicine he had when growing up. Whatever his ailment was, the remedy was always this brown-hued liquid bought from the traditional Chinese medicine shop. And like a trooper, he always took it bravely.

He knew then that the style needed to be either a porter or stout, due to the colour and flavour profile. Eventually, rounds of experimentation led to a porter style since he didn’t want the coffee or chocolatey notes common in stouts. Chen wanted more bittersweet caramel flavours to shine, thus arriving at the porter.

Like his first two beers, his new launches have a strong food pairing element to it. On the bottle labels you’ll find recommended accompaniments like sambal stingray, orh luak and even sea salt caramel cheesecake.

“It has always been part of the brand,” remarks Chen. “More often than not you’ll be eating something while you drink. Even if you’re not, you might start craving for something.”

“Yes, the drink has to stand on its own. But it’s also about breaking down the barriers to craft, making it more accessible to people who love food too,” he adds, stating how it’s just like doing wine pairings.

Niang’s beers are available in Singapore at bars like Ren Min (formerly 3rd Culture Brewing Co.), Orh Gao Taproom, Good Luck Beerhouse and Yeastside. Or get them directly from their e-store.