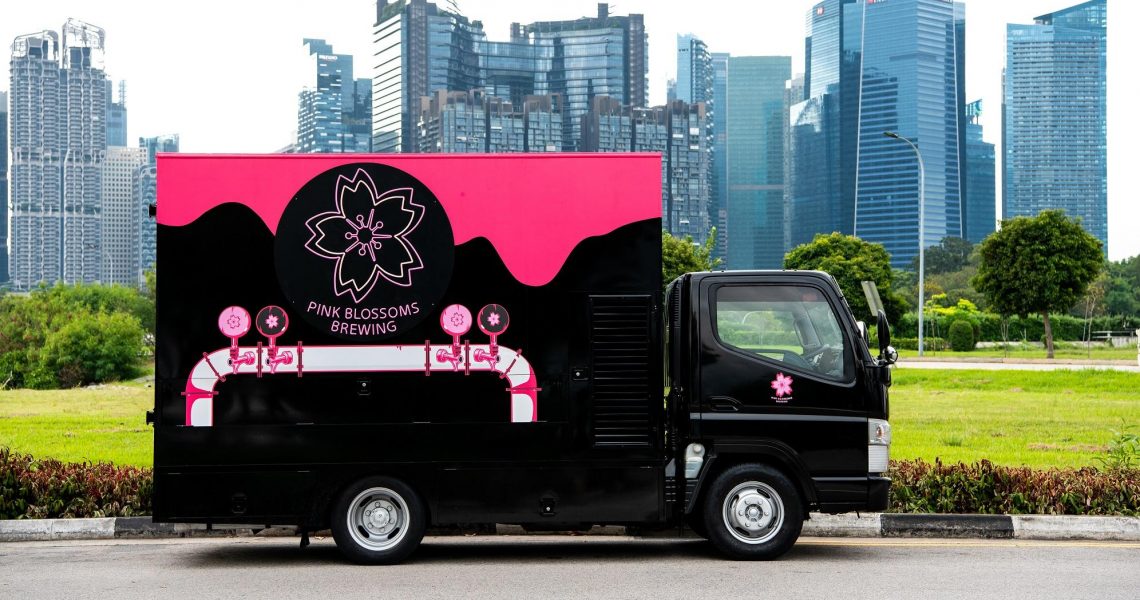 Pink Blossoms Brewing, known for dishing out some of the best tasting Singapore-made craft beers in town since they launched in 2018, is bringing their delicious brews to the hardworking CBD crowd with the city’s first-ever craft beer truck.

While having beer on wheels is nothing new in Singapore, this is the first time a local craft brewery is commandeering their own truck and putting on tap a lineup of only their own beers.

The Pink Blossoms BeerTruck, as it’s called, will mobilise itself at the heart of the financial district at three different spots – Capital Tower Level 1 Plaza, Ocean Financial Centre Level 1 Plaza, and The Promontory @ Marina Bay – on various days between Sep 5 to Dec 4 (see below for full schedule).

Fans of the homegrown craft beer brand often need to make the relatively far trek to their premises in Ubi for a pint of their freshly-tapped suds (especially after their Tampines outpost shuttered), so it is definitely a much-welcomed sight to see Pink Blossoms Brewing making its way to the convenient Singapore downtown.

Flowing from the mobile taproom are a selection of Pink Blossoms’ core beers – including their flagship Lean on Me New England Pale Ale and Hundred Years Milk Stout – plus seasonal specials such as the Oktoberfest Lager I, a Marzen style beer tapping just in time for the namesake festival.

If you’re not sure what to get while you’re there, the beer flight (S$24.90) comprising four 5.5 ounce brews of their choice is a good way to have a taste of their offerings before you commit to a bigger pour.

“To celebrate our fourth anniversary, we are bringing our beers to the office crowd in central Singapore,” says Teo Hong Han, founder and brewer at Pink Blossoms Brewing. “We have curated a selection of our signature brews which are popular amongst Singaporeans. To get a taste of Pink Blossoms, look out for the black truck with pink neon lights!”

The Pink Blossoms BeerTruck will be touring Singapore’s CBD from Sep 5 to Dec 4, arriving at Capital Tower on Mondays and Wednesdays, Ocean Financial Centre on Tuesdays and Thursdays, and The Promontory @ Marina Bay on Fridays, Saturdays and Sundays. It opens from 4pm-9.30pm on Mon-Fri, and from 12pm-9.30pm on Sat-Sun.