Have a taste of German whiskies, rums, and other spirits at Brotzeit 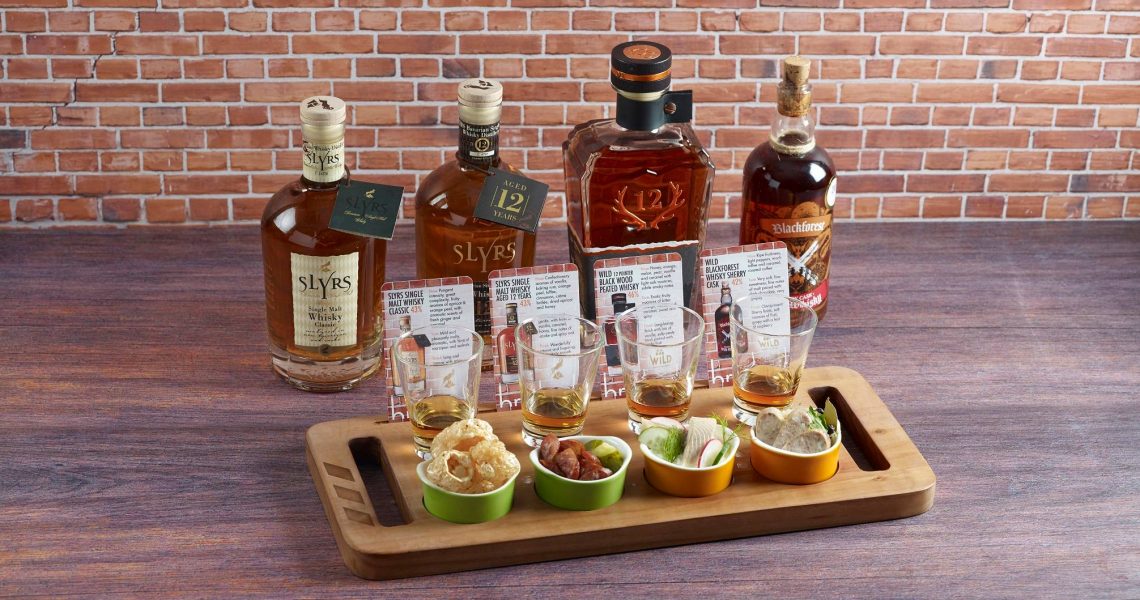 Brotzeit, perhaps best known for their steadfast German beers and hearty cuisine, is now the place to be for German spirits too.

They are doing so in a bid to showcase how German-made gin, rum, schnapps and especially whisky, crafted by awarded distilleries hailing from various regions of Germany and neighbouring Austria, can be utterly delicious too.

Brotzeit is accomplishing this by directly importing from the distilleries themselves and making the spirits accessible across all their outlets. They then offer them on their menu by the bottle or dram, but also as a personalised tasting board.

The Alpine Spirits Sampler (S$45), as the tasting board is called, comes with your choice of four spirits (there are twelve to choose from, with some requiring a S$2 or S$3 top-up), and is also inclusive of four nibbles – Pork Cracklings, Smoked Trout with Cucumber Salad, Bierbeisser & Gherkin, and Sliced Nürnberger with Sauerkraut – to pair with your flight.

In their inventory are prized spirits from the likes of SLYRS Bavarian Whisky Distillery, the number one selling whisky brand in Germany. A pioneer of German whisky and a leading single malt brand, the distillery has been in operation since 1999.

Of their range available at Brotzeit, we especially enjoyed the SLYRS Single Malt Whisky for its nuanced fruit characteristics and soft mouthfeel. There is also a rum cask finished version of the single malt that brings out its dark caramel tones more.

Then there are the WILD Distillery spirits. As the most awarded distillery hailing from the famed Black Forest since 1855, we were really looking forward to trying their whiskies, rums, and gins.

The WILD Blackforest Whisky Sherry Cask is an easy go-to and a solid sipper on any given night. But definitely give the Black Wood Peated Whisky a go too – the peat here is subtle, and much unlike the smoke bombs of Islay.

For the gins, while it’s perfectly drinkable as a dram, we much preferred it in a cocktail. Their classic Gin & Tonic (S$16) does the job well of showcasing the citrus and spice tang of the WILD Blackforest Gin.

If you’re looking to try these German spirits, the newly-refurbished Brotzeit destillerie corner at their Raffles City outlet is most apt. The semi-private area, adorned with barrel installations and furnished with cushioned seats, is great for hosting intimate tasting events or cosy get-togethers as well.