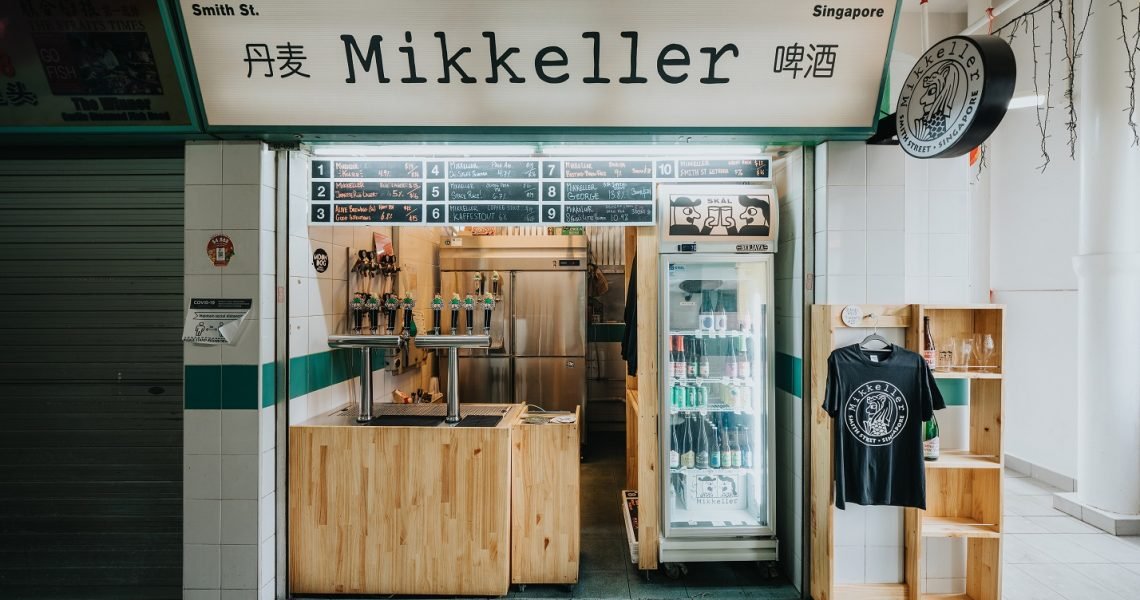 The story of famed Danish craft beer brand Mikkeller’s arrival in Singapore is an undulating one.

First opened in April 2016 as a pop-up container bar at DECK on Prinsep Street, craft beer geeks all over the island went nuts as the cult craft label made its debut in the tiny city-state. And with a sizable 20 taps to choose from, folks were satisfied.

It is little wonder then that a permanent space was warranted, and fast forward to 2018, Mikkeller Bar Singapore was opened. This time, it finds itself in a tucked away second floor shophouse space on Purvis Street (where sake bar and restaurant Tanoke now resides), and with even more taps (25 rotating) available.

Fast forward another 3 years, and Mikkeller has resurfaced in the unlikeliest of places. After having shuttered in 2020 (presumably due to the onslaught of Covid-19), Mikkeller Bar Singapore has changed hands, now under the care of SST Trading Co, and officially reopened (as of March 2, 2021) at Chinatown Complex Food Centre as a hawker stall.

It’s located just a few stalls down from SST Trading Co’s own Smith Street Taps, a pioneering craft beer hawker bar that has been making waves since 2014, long before Singapore’s hawker culture was recognised as an Intangible Cultural Heritage of Humanity by UNESCO.

It perhaps makes perfect sense for Mikkeller Bar Singapore to recreate the success that Smith Street Taps has pioneered. “I am excited for Mikkeller to open up at this unique location in Singapore and to work with our new great partner to bring our beers to locals,” says Mikkeller’s founder Mikkel Bjergsø in a press release.

“Hawker stalls and street food is a part of Asian culture that I really love. This is a fun and novel environment for us, and will be a good addition to our other locations in Southeast Asia.”

It may not have a massive 25 tap list to choose from anymore, but at the new Mikkeller Bar Singapore, its modest 10 taps are always put to good use.

It has opened with Mikkeller staples like the Kaffestout (S$17/pint), a roasty and deep dark beer best had with claypot rice or satay – afterall, part of the allure of opening Mikkeller Bar Singapore within a hawker centre is the proximity and accessibility to tantalising hawker fare.

Meanwhile, the Mikkeller Kölsch (S$16/pint) is an easy go-to beer in hot and sunny Singapore, while the gluten-free Space Race IPA (S$19/pint) is a flavour-packed beer perfect for drinkers with gluten intolerances, but which normal drinkers will equally enjoy. Beyond the taps, find a good selection of bottled and canned offerings too.

The reopening of Mikkeller Bar Singapore also marks the return of the Mikkeller Running Club, with the first session being held come March 6.

For the uninitiated, the running club is essentially a way for Mikkeller fans to meet up and take part in a physical activity (i.e. running) together, in a bid to encourage exploration of the city via various routes around town, as well as to promote a balanced lifestyle. Being rewarded with a free pint after completion of the run also serves as a great motivator.

To find out more and to stay updated on what’s happening at Mikkeller Bar Singapore, follow them on Facebook.

PrevPreviousAsia’s 50 Best Bars 2021 to be held virtually on May 6
NextTried and tested: 10 ready-to-drink packaged cocktails from SingaporeNext
Menu