I had an early taste of Singapore’s first whisky, and here’s why I think it’s a game changer 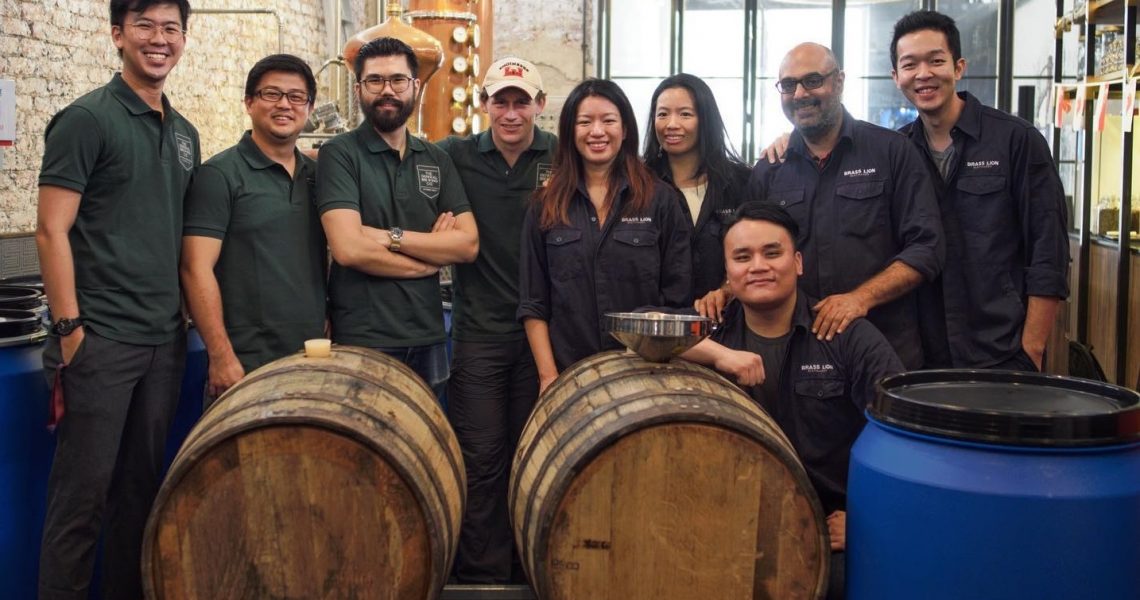 Above image: Teams from The General Brewing Co (L) and Brass Lion Distillery (R) together with the bourbon barrels ready to be filled.

In what seemed like ages ago back in September 2019, I was fortunate enough to witness (and participate in) the cask filling of what will become Singapore’s first whisky.

In a pioneering effort by two Singaporean companies, Brass Lion Distillery and The General Brewing Co, parts became whole when both collaboratively provided all the necessary ingredients needed to produce something that can finally be properly termed a made-in-Singapore whisky.

Not just about having Singapore-based outfits and Singaporeans producing the spirit (which are also present), they wanted the important, palpable elements – such as ageing, distilling and brewing – to be done on homeground.

As rudimentary as that may sound to qualify something as being Singaporean whisky, things aren’t always so cut and dry in the whisky making world.

Companies have been known to procure already-made whisky, alter them slightly, then bottle them and slap their own label on it. As appalling as that sounds, this happens more often than you’ll think in the spirits industry.

There are even businesses out there whose main source of revenue comes from simply selling white labelled spirits to others, who in turn pass it off as their own. This is actually legal and companies need not be forthright with where the original spirit came from.

Most consumers are none the wiser about this practice. But that’s not what Brass Lion Distillery and The General Brewing Co are setting out to do. They want to produce a bona fide made-in-Singapore whisky.

To that end, they’re actually doing everything, only stopping short of starting their own barley farm, all in Singapore.

To properly appreciate the significance of this endeavour, it is perhaps best to take a look at an Asian counterpart: Japan.

Having successfully produced whisky for over a century now, the country had only recently come up with guidelines (not legislation yet, unlike other whisky producing countries such as Scotland and the US) in February 2021 as to what can constitute as Japanese whisky.

Some of the guidelines include requiring the whisky be made in a distillery in Japan (yes, it’s that basic), for there to be a minimum of three years of ageing in Japan, and for the water used in production to be sourced from Japan.

If these seem like things that should be a given, again, the industry is unfortunately not so straightforward. In fact, many unethical producers often cut corners, and simply purchase ready-made whisky from another distillery, bottle them in Japan, slap a Japanese-looking label on the bottle, then sold them as Japanese whisky.

This easy turnaround oftentimes fetches them a premium without them requiring to do any further work to make it grounded as a made-in-Japan product. And businesses are making big margins through this baseless Japanese affiliation.

So when guidelines were finally released by the Japan Spirits & Liqueurs Makers Association on what they deem fit to be called Japanese whisky, it was a big deal for the industry. They now at least have a minimum standard to adhere to, and it ensures (on some level) that Japanese whisky must be made in Japan.

While Singapore is still far from even having an industry association, what more guidelines to deem what should be considered worthy to be called a Singapore whisky, it is good that local distillers like Brass Lion are already making sure that their whisky can be above reproach.

Knowing this, and despite the lack of regulation at the moment, what should then properly count as bona fide Singapore-made whisky lies entirely in the process and place.

The folks from Brass Lion and General Brewing believe that one of the key factors should be to allow Singapore’s climate and environment, including its tropical heat and humidity, to shape the product as much as possible.

It’s the idea of allowing the unique region where Singapore is located to influence the final profile of the product, much like how the land and seascapes, as well as the weather temperaments of Scotland affects its whiskies. I refer to Scotch a lot in this article, rather than say bourbon, as the style of whisky being made here in this endeavour bears plenty more similarities to the former.

“The barrel is stored in as natural an environment as possible,” states distiller Javin Chia, who was integral to the project. “Although we cannot store the barrel outdoors, as the rain and humidity will cause it to deteriorate, we store it indoors at the distillery with minimal climate control and allow the environment and humidity to do its work.”

Even the wash (the base liquid ferment of malted grains used to make whisky), is first produced locally at Singapore’s General Brewing, a brewery best known for producing local labels like Off Day Beer Company and for incubating brands like Niang Brewery Co and Civilization Brewing.

The wash, made and conceptualised by General Brewing’s lead brewer Daryl Yeap, was also fermented at ambient temperature. Using a strain of barley known as Maris Otter, and using top-fermenting ale yeasts, it resulted in a fruity and complex single malt wash.

It made sense for a distillery to collaborate with a brewery to make the whisky, since the process of making a wash is very similar to making beer. Once the wash was done, it was Brass Lion’s turn to work.

Over five days, the team, including Chia, toiled day and night to distil and turn 2000 litres of wash into new-make, a high proof spirit that is essentially pre-aged whisky. This part of the process is harder than it sounds, as Brass Lion’s pot still (they’ve chosen not to use the column part of their hybrid still) only had a volume of 150 litres.

Taking into account that the wash underwent double distillation, meaning it was distilled twice, it required the team to repeat the process 22 times in order to obtain just 180 litres of new-make. That precious new-make is then filled into a bourbon barrel, similar to the way many a Scotch is made.

As an aside, Brass Lion actually procured two barrels, but only one was used for ageing whisky. The other was (and still is) used to age gin, resulting in their award-winning Barrel Aged Gin, which is already available in the market.

So, is the whisky any good?

It is still some time before the whisky is fully ready, since it was intended to be aged for three or more years. But having tasted the product at its one year mark (thanks to a chance sneak peak I had when I was visiting Brass Lion Distillery for their Christmas Gin-gle in 2020), I can already taste the profound effects a tropical climate like Singapore has on the new-make.

Even with such a short time spent in the barrel, there is already a depth and nuance in its profile you’ll find in whiskies usually aged for far longer. It should come as no surprise however, as with Singapore’s equatorial climate at play, this accelerated maturation is to be expected.

For me, the whisky led with an alluring fruitiness and citrus spark, leading to a current of mango richness and caramel, before finishing with bright oak and malty tones that lingered on slightly after swallowing.

I likened the taste of the one-year-old new-make to a certain whisky brand in Taiwan that also does single malts produced and aged in a similar (though still quite different) tropical climate and also in bourbon barrels.

“I see why you think so, and I think there are definitely similarities in terms of the sessionability of the whisky and its fruity notes,” remarks Jamie Koh, founder of Brass Lion Distillery, when I asked if she felt the same way about the whisky at its current state.

“However, our whisky was fermented, distilled and aged in our climate and I believe that its Singaporean character will come into its own as a product with its own distinct flavour profile.”

Chia also chijmes in. I asked about his current thoughts on the one-year-old spirit and how he thinks the whisky will eventually turn out at the three-year mark.

“The taste profile of the whisky is remarkably dessert-forward,” he says. “I get notes of lemon custard creams and victoria sponge, and it still has ways to go.

“I think the whisky will develop a more well-rounded, sweet flavour profile, with the addition of fruity esters on the top note. The maturation will also impart more notes of vanilla, caramel and coconut.”

If that sounds delicious, it is. As whiskies go (and I drink a lot of whiskies), I am already seeing and tasting the untapped potential and possibilities for local producers. There’s definitely room to go far.

The difference with what’s happening now with this endeavour, compared to what other local businesses have tried to do in the past, is that they are actually creating a product true to its promise.

It’s not about going the extra mile or coming up with a fancy marketing campaign, but simply adhering to the age-old promise that your product is of quality and that it is actually what it says on the label – a Singapore whisky.

In today’s world of highly adulterated foods and beverages, it’s perhaps refreshing to see that craft producers are satisfying our desire for something real and true, even when it doesn’t always make commercial sense.

As I penned down this article, I kept recalling that momentous occasion when I was filling the new-make into the barrel, thinking of fanciful ways to describe that eventful day.

Yet, it wasn’t a huge ceremony with major fanfare or anything like that. Rather, it was actually quite intimate. The folks present were all either part of the project or fellow whisky fans like me, who are all simply geeking out loud on the inside.

What struck me then and what’s still imprinted in me now was how history was unfolding before me, yet how this was only the beginning. Many more craft producers will be emboldened to step forward because of the efforts of these pioneering folks, and I can’t wait to see that happen.

“Will Singapore’s future whisky makers even know how the road was paved?”, I thought to myself as I poured the new-make into the barrel at Brass Lion’s industrial HQ located in a remote corner of Singapore.

All that’s left to do now is to wait for the whisky to come of age – quietly and discreetly – until such time it is ready to make its roaring debut to the world.

To stay updated on the progress of Singapore’s first whisky, head here.